Analyzing energy policy is incredibly complicated. There are hundreds of variables to look at: Emissions, output, energy source, location, year commissioned, just to name a few. Figuring out what data you want to analyze depends on what questions you're trying to answer.

Electricity produced from coal is on a decline in this country. Experts point to cheap natural gas as the main cause, but a decline is easy to access seams and increased regulation play a role as well.

Looking at the graph below, notice the gap between the yellow(coal) and green (natural gas) lines back in 2003. The United States produced almost three times more electricity from coal than they did from natural gas.

But in the last year, natural gas electricity production has largely caught up with coal, even surpassing it for a month in April 2012.

(In case you're curious about the frequencies of this chart, the spikes represent winter and summer production, when demand is the highest. The valleys are spring and fall.)

If this trend continues, more coal plants will shut down. Plants will age and not have the resources to upgrade, regulations will make it more difficult to build new plants, and other technologies and efficiencies will simply push coal out of the American electricity production market. As the industry continues to decline, which it almost certainly will, thousands of jobs will disappear.

But the main question is: Where are these coal power plants, and what effect will their closure have on their communities? 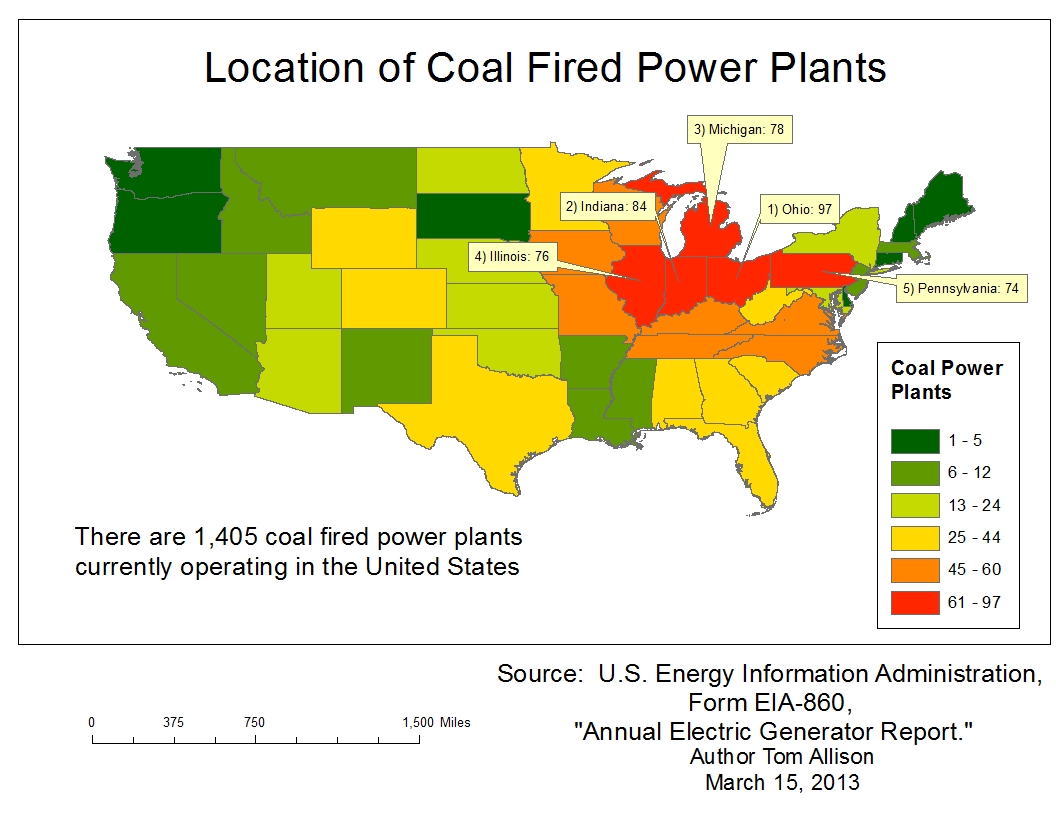 The Department of Energy keeps detailed records of every power plant in the country, and the Annual Electric Generator Report has a lot of information on coal fired ones, all 1,405 of them. The rudimentary map above is just the number of each state's coal plants (frequencies calculated in SPSS then exported into an ArcMap state shape file), with arbitrary classifications.

Clearly there is a concentration of plants in the Upper-Midwest and Appalachia. Are policy makers considering the effects of the transition away from coal (which is inevitable) on these areas? As we've seen in other maps, the Midwest and Appalachia already have plenty of problems. Will the jobs be replaced by new ones in the natural gas industry? Are policymakers considering transition and re-retraining programs for those left behind?

Areas for further analysis: (Almsot too many to go over, but here are a few)

Because DOE keeps the year each power plant was built, you could map where the nation's oldest (and usually the dirtiest) plants are.

DOE also keeps records on the locations of other fuel sources, such as wind, solar, nuclear and natural gas:

DOE also lists each plant by county. A more sophisticated analysis could be conducted, pinpointing exactly where the plants are, allowing for more detailed analysis of individual states or regions. At that point socio-economic data is even more relevant.

Sierra Club has geographic data on the dirtiest coal plants in the country. It might be interesting to see that compared with asthma rates, median income, etc.

What would you want to see?