A Map of Deals for Developers

Developers have received $1.7 billion in subsidies and tax breaks  in the District in the last decade. Some of these projects are cash machines for the developers, with corporate tenants like Target at the DC USA shopping center in Columbia Heights, or homes for professional sports teams like the Verizon Center. That's a stunning pot of money for this little city, and to an industry that may not need that sort of public assistance.

I made a map of the projects that received the largest packages of subsidies:

You can't help but notice that only one of the top 20 subsidized projects is across the river, and that the majority are along the heart of a Northwest corridor that you wouldn't think would need any assistance to turn a profit.

Here are 20 projects that received the most public assistance, according to WAMU and the Office of Chief Financial Officer. "Deals for Developers" also looked at the campaign contributions the developers gave to city officials, but with strict regulations on campaign finance, I don't think that data set is particularly persuasive.


This was a very impressive piece of reporting from WAMU. They also provided a lot of data for other journalists to analyze and visualize. You should donate to them:

Wall St. is Growing Twice as Fast as Jobs

The Dow is on a tear!

Here's the Dow Jones Industrial Average from January 2008 to the present, including yesterday's new record of 15,215: 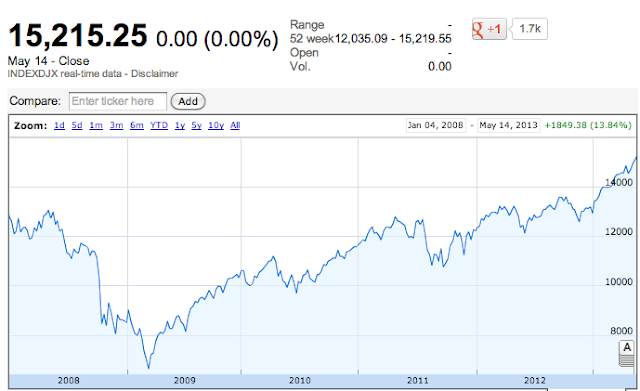 And here's BLS' unemployment rate, from the same time period:

The job recovery is there: last month's 7.5% is the lowest its been in Obama's presidency. But we're still 50% below where we were pre-crash.

Company Town: See How Many D.C. Area Residents Are in Government Jobs

Photo by Brian Mosley
Seems that nobody ever tires of pointing out that Washington is a "company town," dominated by a single industry and affording little room to any other interest. Of course, any D.C. resident knows that the city and its surrounding communities are more diverse than that, but the appellation fits. Los Angeles has entertainment, San Francisco has technology, Detroit had cars, and we have government.
Whether federal, state, or city, no era of sequestration will dislodge the public sector as the Washington region's most dominant source of employment, but not everybody's neighbors are working for the man. Analyzing figures released by the U.S. Census Bureau, we can see which neighborhoods are most dependent on government, and where other industries play a larger role.
The maps below were made for DCist by Tom Allison, who previously offered a crowdsourced Google mapplotting rooftop bars around town. For this set, Allison analyzed employment data in the Census Bureau's American Community Survey.
The American Community Survey supplements the decennial census that all Americans complete. Each month, roughly 250,000 residents are sent a lengthy questionnaire asking information that was previously only solicited from people lucky enough to receive the old "long-form" version of the census. The bureau analyzes the resulting data to extrapolate trends about life in the United States.

Map by Tom Allison
Using the survey's five-year estimates for responses pertaining to employment, Allison applied that data to a map of the greater D.C. area, including Montgomery and Prince George's counties in Maryland, and Alexandria, Arlington, and Fairfax County in Virginia. It's hardly a surprise that the census tracts—roughly analogous to established neighborhood boundaries—around local military installations are the deepest shades of orange and red. Navy Yard, in Southeast D.C., is as red as it gets, with more than 50 percent of residents on the government payroll. Tracts around the Pentagon are consistently yellow and orange, while Fort Belvoir, Va. is very red, too.
The northeastern section of Prince George's County also features a large red splotch. No surprise there, as it surrounds the University of Maryland. Over 13,000 people work full- and part-time at the university, making it one of the state of Maryland's biggest employers.
Higher concentrations of government workers can also be found in D.C. wards 5, 7, and 8, and much of Prince George's County is solidly yellow, indicating that between 30 and 39 percent of residents in those zones are government workers. Those wards and Prince George's County have majority black populations, and there is a demographic correlation between public sector employment and ethnicity. A 2011 study at the University of California, Berkeley found that between 2008 and 2010, 21.2 percent of all black workers across the United States were government employees, compared with 16.3 percent of non-black workers.
But the racial breakdown is more easily set aside in the D.C. area. The Census Bureau's definition of what constitutes a government worker encompasses "employees of any local, state, or Federal governmental unit, regardless of the activity of the particular agency." And that includes occupations beyond direct public administration, such as health or transportation.
The greater D.C. area has no shortage of governments, intergovernmental agencies, and transportation authorities to choose from, and Allison's maps, both for the percentage and raw number of government workers, are a colorful reminder of the fact that this region is dominated by the public sector. As Mayor Vince Gray or any other city official will gladly point out, nearly 60 percent of D.C.'s workers are in the private sector, with industries like hospitality, education, construction, and technology leading the pack.
But on Allison's maps, most of the D.C. is still a sea of yellow and orange, reflecting that in those census tracts, public-sector employment is between 11 and 29 percent. That's not a majority, of course, but it's still far more emphatic than an analysis of anywhere else. A map of the entire United States would show an ocean of green. Nationally, 14.9 percent of workers are in government jobs, according to the same five-year estimate. 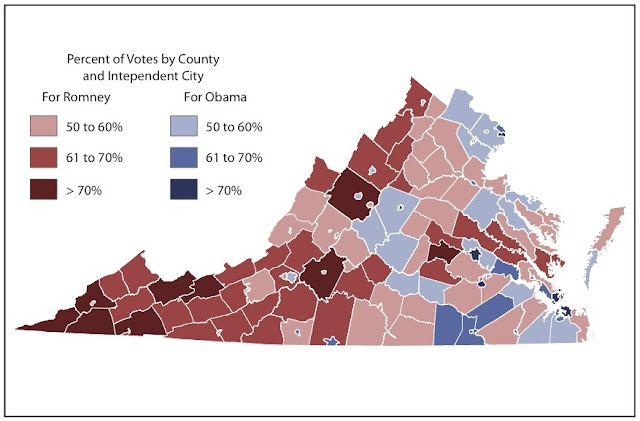 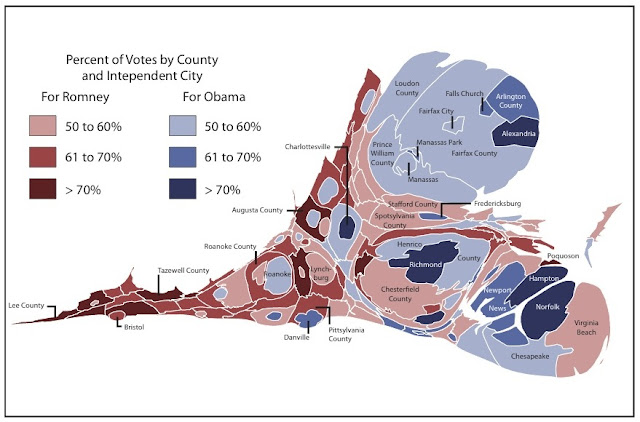 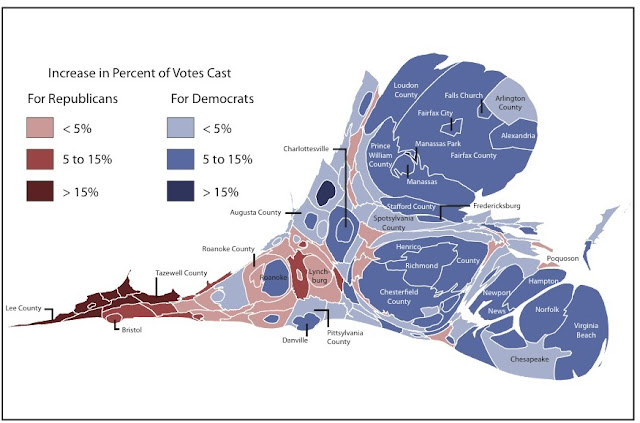 I also recommend everyone check out Hanna and Farnsworth's full report here:
Posted by Tom at 11:04 AM 1 comment: