One natural trade-off of urban living is the lack of private outdoor spaces. Rowhouses can be great for density and community, but the narrow strip of land in most lots is pretty tight. Outdoor furniture, grills, and of course cars compete for this space. Most of the rental units going online in the next few years are all one and two bedroom apartments in the sky.

Community gardens can provide a substitute for avid gardeners without a plot of their own. Washington D.C. has 38 of them. And they're fairly well spread throughout the city. 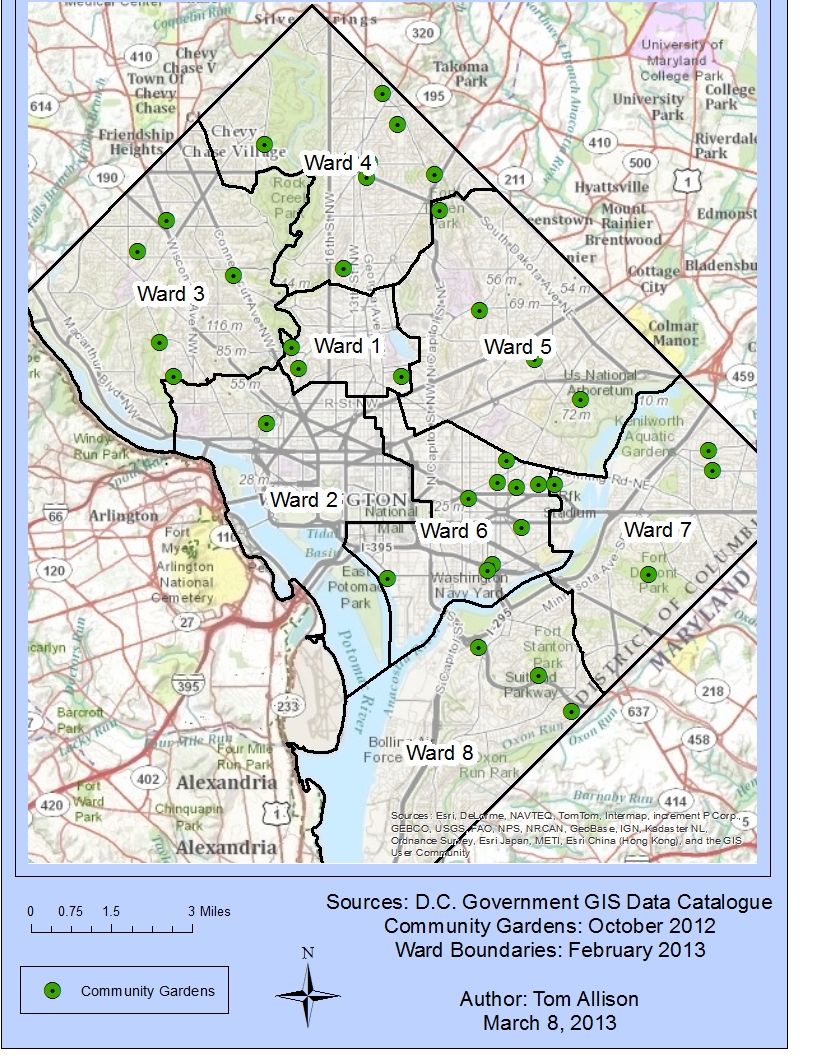 The shape file didn't organze the gardens by which ward they're in, but ArcMap makes it pretty easy to calculate the garden point features inside each ward polygon using the select by location feature. 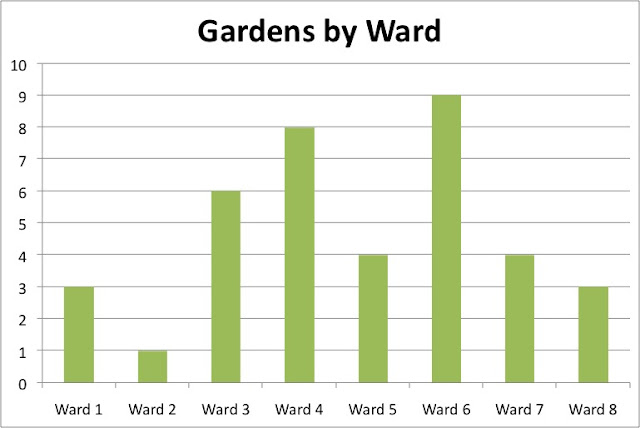 Analysis
The 2010 census found Ward 2 to have the largest population and yet only one commmunity garden is established there. Its expensive real estate in neighborhoods like Foggy Botton, Dupont Circle, Penn Quarter, Chinatown, and the West End undoubtedly make finding open spaces for community garden development difficult.

Ward 3 has a respectable six gardens. This could be seen as a little ironic considering Ward 3 is one of the more suburban areas in the city, and is probably in the least need for public outdoor spaces.
While the smallest in geographical area, Ward 1 is tied for the second most populous ward in the city, and its three gardens is surprising. But if we change the metric to gardens per square mile, Ward 1 is probably doing quite well.

Ward 6: On one hand, high-income, established neighborhood of Capitol Hill to the north. On the other, in-transition gentrification, with lots of reclaimed lots around the Navy Yard and baseball stadium. This is a plausible recipe for a lot of community gardens.

So What?
Policy analysts shouldn't just conduct this type of social research and leave it as is. Policy debates are conducted within a concrete political context. I think Michael Pollan in this quarter's Lucky Peach made a good argument for why should we care about community gardens:

We're sensorially deprived right now in modern life. Our eyes are engaged - sometimes out ears - but our bodies? Not so much. These aren't just bags of bones we're carrying around. When we cook, when we garden, when we make things with our hands, we're engaging all of our senses and that has - in ways we don't really know how to quantify - deeply positive effects on our mental and physical health.


-Create a new attribute field of gardens-per-capita, calculate for each ward, graphed on a color ramp.

Thanks to the District of Columbia Data Catalogue (great source of free .xml, .kml, and .shp files) for providing a shape file updated October 2012.