North Dakota lawmakers passed a resolution on Friday to allow the public to decide whether the State Constitution should assert that life begins at conception, a move that would essentially ban all abortions in the state.

The measure, which will appear on next year’s ballot, comes a week after the Republican-controlled Legislature adopted a law that made abortion illegal once a fetal heartbeat is detected, which could be as early as six weeks into a pregnancy.

States have a myriad of restrictions and regulations on abortion. Parental consent, counseling recommendations, second opinions, conditions on health of the Mother are just a few. With North Dakota's push to pass a State Constitutional amendment to outlaw abortion in the state based upon a strict period of time after conception, it would appear that the time period in which a state allows abortion wields a significant impact on reproductive choice.

The Guttmacher Institute tracks legislative data on how each state restricts abortion, including by weeks of pregnancy. Here are the results, when projected onto a U.S. Map:

Certainly there are other restrictions that make it very difficult to get an abortion. Mississippi is a good example of this: last year the state attempted to ban abortion by heavily regulating where they could take place.

Below the frequencies are charted: Half of the states ban abortions after 27 weeks, while almost a fifth have no restriction at all. 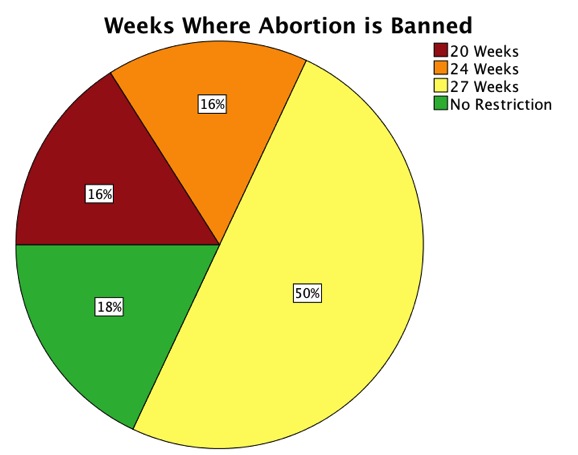 One maternal health fact deserves to be noted here, however. Tests that detect potentially fatal birth defects and chromosomal abnormalities like Down Syndrome aren't conducted until between the 16th and 18th week of pregnancy. So the 16% of states that ban abortion after 20 weeks allows for a very tight window for mothers who make their decision to abort a pregnancy based on those tests. If they miss that narrow two week window, states could be requiring women to carry a doomed pregnancy to term (imagine a mother who's been told by her doctor that her baby's lungs aren't developing properly, and will die as soon as it's born).

With states like North Dakota and Mississippi hosting only one facility providing abortions, and with 4 in 10 women who have abortions coming in below the poverty level, the post-20 week imposes an extreme restriction on poor women in those states. The notion that North Dakota and other states are moving to restrict that even further should cause alarm not just to advocates of reproductive choice, but also to anti-poverty and social justice advocates as well.
Posted by Tom at 2:31 PM No comments: