Z Scores can be an easy and effective way to organize and analyze a dataset with problematic measures of central tendency. Z scores, also known as standard deviation units, demonstrate how far away (positively or negatively) any given data point is away from the mean of that data set. You could just show the difference between the data point and mean, in the original units, but that might not give you as clear a picture of how just how much that point differs from the central tendency.

Take population growth by Virginia county for instance: According to the American Community Survey's 2012 data, most counties are adding people, but some are losing residents. In fact, there's a huge range in population change. Henry County, for instance, has lost 1,185 residents in between 2009 and 2011. Fairfax, in northern Virginia, gained over 36,000 people.

We have also have a significant positive skew here. Look at how much larger the mean is than the median in the below SPSS output: 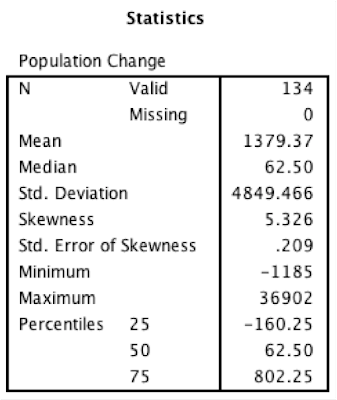 In fact, only a handful of counties greatly affect the central tendency of the dataset (Surprise! They're in Northern Virginia). The graph below shows how three counties spike far above the generally stable cluster near the x axis. 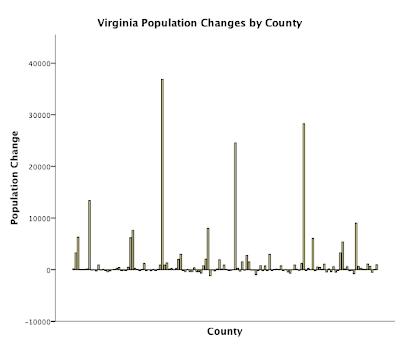 So the mean and median isn't helping us very much figuring out population change in Virginia. The "average" county isn't adding 1,379 people annually, as the mean would suggest.

Join those Z scores to a shapefile of Virginia, classify under natural Jenks breaks, and voila: 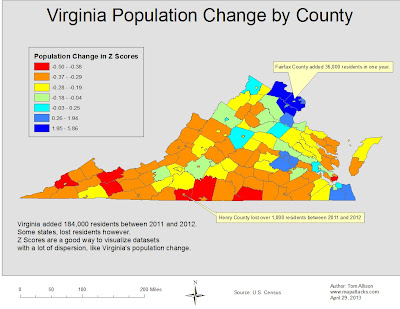 I've been doing a lot of thinking about the Virginia Gubernatorial Race and the changing demographics of the state. And looking at a map like this demonstrates that Democrats really don't need to compete throughout the state in statewide races. They can win by continuing to shore up Northern Virginia, and will continue to with these population changes. Not a bad plan, unless you want to win back the state senate.

Some folks over at the D.C. Reddit group have been trying to compile a complete list of the city's rooftop bars, and someone asked for a map. So here you go: