Burgers are a big part of my life. I love making them, trying new ones, visiting old favorites.  But despite the thousands of burgers I've devoured, it's tough to beat an "all the way" burger from Five Guys.

Having spent a lot of time in the Washington area, I expect to find the red and white check logo and distinctive peanut oil smell in most commercial developments. But a lot of the country isn't so lucky. (I remember when New Yorkers lined up around the block when the first NYC location opened).

This dataset displays all of the Five Guys Restaurant locations across the United States and was downloaded from GeoCommons. The dataset contains the store's full physical address and addresses were geocoded to obtain their lat/lon coordinates. The chain has grown exponentially since 2007, and I'd love to map a more recent dataset. I asked Five Guys marketing department for more recent data, but they declined to oblige:

Thanks for reaching out to Five Guys!

While we really appreciate your interest, unfortunately we don’t have that type of information to give out at this time. However we certainly welcome you to use our store locator feature at our website.

Thanks again for thinking of us! We wish you luck with your map making J

I'm definitely not going to copy and paste every single address from their store list into an organized dataset.

Anyone have any other datasets they'd like to see rastered? In-N-Out locations maybe?

Senator Patty Murray on The Crisis in Youth Unemployment

Sen. Murray joined Sen. Booker, Young Invincibles and unemployed youth to unveil the findings of a new report titled "In This Together: The Cost of Youth Unemployment." The report quantifies the amount of lost tax revenue and benefits paid out, attributed to youth unemployment. Additionally, this report makes the case that youth unemployment should concern everyone, not just young people, by putting a price tag on the cost of youth unemployment to each individual taxpayer for the first time
Posted by Tom at 12:34 PM No comments:

The Hidden Cost of Youth Unemployment

This post was originally published on Talking Points Memo

As Congress confronts the January 15th deadline to extend the United States’ spending authority, members should prioritize addressing the nation’s youth unemployment crisis. Yesterday, Young Invincibles released a report that for the first time puts a price tag on the country’s millions of unemployed young people. The numbers are staggering.

In the United States, chronic youth unemployment results in a net $8.9 billion annual loss. That breaks down to $53 per taxpayer. Lost tax revenue accounts for nearly all of it. The takeaway is clear: youth unemployment is a problem that affects not just one generation, but the entire economy.

We already know that youth unemployment has a detrimental impact on the future and financial security of young adults. Unemployment early in adulthood can lead to depressed wages for decades after. But the individual or generational burden is not the only cost; we’re all in this together.

On average, we calculate that federal and state governments will realize an over $4,100 annual loss in foregone tax revenue and benefits paid out for each unemployed 18- to 24- year-old. The costs to government and taxpayers grow as unemployed individuals age. We estimate that state governments and their taxpayers will lose a whopping $9,875 annually for each unemployed 25- to 34- year-old. Putting that in perspective, the average tuition and fees for an in-state resident at a public college during the 2012-2013 school year was $8,655. In any given year, we lose more money on a struggling unemployed young person than it would cost send him or her to an in-state public university.

While every American taxpayer will share the $53 per year in federal costs, not all states carry the same burden. Some states have a disproportionate share of unemployed young people, but their wages and state tax policies have an impact as well. Youth unemployment costs Californians $1.7 billion, the most of any state in the nation. That makes sense: there are three-quarters of a million unemployed young people in the nation’s most populous state. New York, Illinois, and Pennsylvania also have large populations so bear large burdens over $300 million annually. However, significantly less populous states such as North Carolina, Georgia, New Jersey, Alabama and Kentucky round out the top 10. 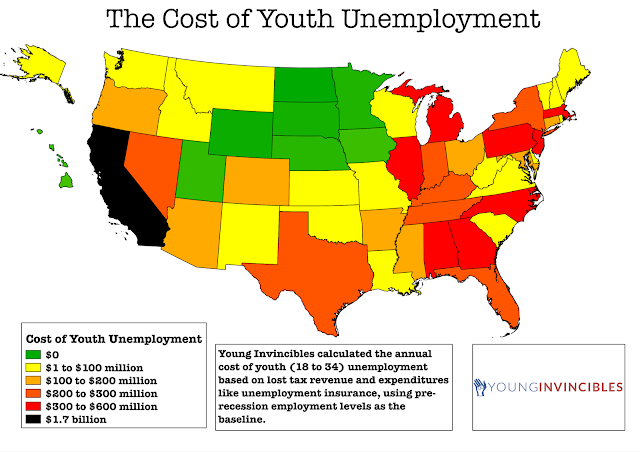 But youth unemployment affects every single tax-paying American, so we calculated the cost per taxpayer. 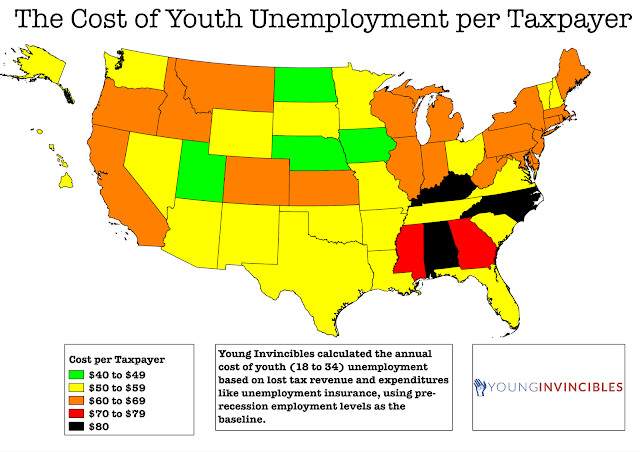 Southern states, with their high levels of youth unemployment and smaller populations, have paid the most. Residents of Kentucky, Alabama and North Carolina, have all had $80 added to their tax bill. Georgia and Mississippi residents each paid an extra $71. These additional costs reflect a significant burden to taxpayers, particularly those in Southern states, which traditionally have had relatively low tax rates.

But the number of unemployed young people isn’t the only factor that drives these estimates. States like New York and Massachusetts have lower youth unemployment rates, but because incomes are higher there (Massachusetts has a minimum wage of $8 and New York’s is $7.25), the amount in lost tax revenues increases, as does the estimated compensation in unemployment insurance. Taxpayers in states like these pay an extra $60 to $69, despite the fact that there are many more taxpayers to share the burden.

The average unemployed 18- to 25- year-old received only $44 in welfare and $236 in unemployment insurance. Older workers received a bit more: The average unemployed 25- to 34- year-old received $1,736 in unemployment benefits but only $92 in welfare payments. A lot of this is driven by policies that allocate funds based on how much money a worker made before losing a job, particularly in the case of unemployment benefits. Younger workers, with less experience and lower salaries, therefore qualify for fewer benefits. But in a time of budget austerity, it’s also important when we think about the money we’re leaving on the table when so many young people don’t have jobs.

We’re often told that we don’t have the resources to invest in programs addressing youth unemployment, that we can’t afford to fund workforce and training programs that would give young people the skills to compete in the modern economy. But as these stats show, we can’t afford not to invest in them. Everyone suffers when a young person is out of work, not just the individual. To address this problem, policymakers should implement a number of proven cost-effective solutions, like re-investing in AmeriCorps and the Youth Opportunity Grant.

But moving beyond the scope of what government can do, employers across America stand to benefit from creating roles within their organizations for more Millennial workers. We know intuitively this generation is adept at employing the latest technology and increas¬ing productivity. We know this generation has learned collaboration and an inclusive approach. Polls show we are entrepreneurial in our think¬ing, in part because we doubt institutions will be able to keep their commitments to us in years to come and we have become more creative and self-reliant as a result. These are all qualities that 21st century businesses and organizations need more of to innovate and grow.

So hire a Millennial! We're all in this together.
Posted by Tom at 11:36 AM 6 comments:

Heat Map of Every Building Permit in D.C.

The DC Data Catalogue does an awesome job releasing interesting data about our fair city. Above is a heat map of every active building permit, as of January 10, 2014. They have the kml shapefile, and you just have to transform the data into a raster.

The dataset contains locations and attributes of building construction and alteration permits applied for and approved by the District of Columbia Department of Consumer and Regulatory Affairs. There's plenty of activity downtown along the K Street corridor. No surprises around Shaw and H St NE as well. I was a little surprised at the activity around Ft. Totten and Benning Rd near Marshall Heights, but I haven't been in those areas in a little while.

Of course, not every building permit is created the same. This dataset captures large construction projects like the O Street Market development in Shaw, as well as someone renovating their bathroom in Georgetown.

Next steps: Maybe I'll add a layer of metro lines and proposed street car to see if there are any associations there.
Posted by Tom at 4:05 PM 5 comments: